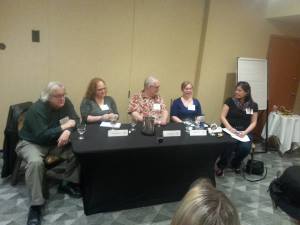 Another Con, another blast. I hate to sound blasé about any aspect of the con-going experience, so I’ll put it like this: a great time is what I’ve come to expect from sci/fi conventions, and Can Con delivered once again.

Can Con is held in Ottawa, so each trip means I also get to spend some time with my parents. On this trip I went down on Thursday Oct. 29th and came back on Monday Nov. 2nd, so I got an extra evening and two additional mornings with them! My ride there and back was with Elizabeth Hirst and her parents, and mutual friend/author/strange funny person Ira Nayman. All of us were attending to launch Robotica, Pop Seagull Press’ latest anthology. Liz and I also started to put the word out about the re-release of The Five Demons You Meet In Hell. We had a table set up in the dealers’ room, where I spent most of my non-panel time.

The launch of Robotica went extremely well. There was cake. Yummy cake. We had five readers and a decent-sized audience, plus a video hello from Jen Frankel, who sadly was unable to attend in person. Ira Nayman read first and I read last, and good times were had by all.
I had a great reaction to my reading. Lots of laughs in all the right places, and all the other readers said they were glad they didn’t have to follow me. Ego boosts don’t come much better than that!
My panels were interesting, and free from any negativity or bad behaviour. And that includes the panel on villains! I liked that one; any discussion where I can bring up both Megatron and Veggie Tales is definitely a winner.
That was Friday night. On Saturday I had one on ghost stories, and I had no idea how that one was going to go. I’m not a big fan of ghost stories, and I think I’ve only written one (and that one was based on an old joke), but my fellow panelists had their game faces on and we had a good talk.

My other Saturday panel was on cult films. I was better prepared for that, with a list of my favourites. We hashed out a definition of a cult film – basically, a genre film that was poorly received at first, which went on to gain a following of devoted fans long after its initial release. I would have liked to have talked more about Army of Darkness, because who wouldn’t? And I don’t care what everyone else says, I hated The Rocky Horror Picture Show! Nevertheless, it was a fun panel.
But not fun enough to compensate for missing the paper airplane contest, which was on at the same time. 😦 A shame. It’s a vital part of the CanCon experience for me!
Sunday’s panels were Speculating Sex and Sexuality, and Fan Fiction Reading – The Guilty Pleasure. The sexuality panel was scheduled for 10:00 AM, and was remarkably well attended for a Sunday morning event. The audience had plenty of intelligent questions, and I think my co-panelist Derek Newman-Stille and I did a great job!
My final panel was originally going to be about reading and making fun of poorly-written fanfic stories. However, my co-panelist Mary Stormy Pletsch didn’t like the bullying tone suggested by that description, and instead pitched a more general ‘what is fanfic’ panel. I was more than happy with the new direction, as it gave me the chance to talk about my Bane of the Doctor story. Mary is also a Transformers fan, an unexpected bonus!
On Monday I journeyed back to Toronto with Ira, Liz and her family, and post-con depression set in. I’m delighted I had the opportunity to attend, and plan to be back once again next year. 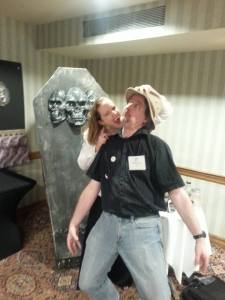 Next up for me: SFContario!